Title: He Shoots, He Scores (Skate to Love Book 1) 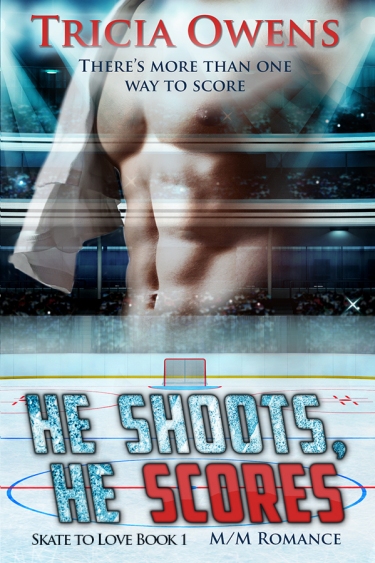 “There’s more than one way to score.”

When superstar winger Neil Shannon is injured in the Stanley Cup Finals, he loses more than the hockey championships. With his confidence shot, his career begins to fall apart and an early retirement seems inevitable. Unwanted by his former team, Neil is traded to one that’s starting over. Even worse, he’s joined there by his biggest rival, the sexy Swede Adrian Magnusson. Adrian feels responsible for Neil’s fall from grace and is determined to revive his career, but Neil wants to stay far away from this Swedish temptation, or else he’ll lose the last thing of value he owns: his reputation.

ADD to you Goodreads TBR:
https://www.goodreads.com/book/show/53469367-he-shoots-he-scores

Download your copy today or read in Kindle Unlimited!

“I like keeping in touch,” Magnusson admitted. “And I thought it would be fun, texting you. We’re always being pitted against each other by the fans and the media. Funny if they got it all wrong, yeah?”

“We’re not really friends, though,” Neil said, regretting it immediately when the light dimmed behind the other winger’s eyes. “I mean, we don’t know each other that well,” he hastened to add. “This is the first time we’ve said more than a few words to each other.”

“We should be a secret.” Magnusson’s face, normally animated, became still. “You and me.”

You’re already mine, Neil thought. He knew Magnusson meant only friendship, but a person could dream, and Neil was good at entertaining dreams.

“We are a secret,” he declared with drunken boldness. Let Magnusson think he meant it innocently. It didn’t matter.

Emotion moved across the Swede’s face, something wistful. Something stronger. Magnusson was strangely intense when he was drunk. It made Neil nervous, as though anything could happen, good or bad.

Then Magnusson grinned, and the tension snapped.

“Don’t say something like that around a Swedish lion.” Magnusson abruptly stood up and strode to the bathroom. “I’m going to shower.”

He left the door open and Neil could see him clearly in the mirror’s reflection, clumsily undressing. Neil opened his mouth to yell at him to shut the door. But then the tight yellow dress shirt came off, and the undershirt beneath it—and Neil forgot what he was going to say.

Damn, he’s built. He stared openly, unable to look away as the other man struggled with his tight pants until he finally managed to yank and kick his way free of them. His thighs were indeed tree trunks, his calves chiseled. And his ass—Magnusson wore a thong beneath his pants. Neil choked.

Magnusson heard him. His blue eyes flashed up to the mirror, wide with shock. He hadn’t realized Neil could see him. But instead of blushing as Neil expected, Magnusson’s expression grew intent again. Holding Neil’s captive gaze, he reached back and slapped himself loudly on one ass cheek.

He Shoots, He Scores by Tricia Owens
My rating: 5 of 5 stars

Holy wow…I’m in love…there is no other words to use…but I don’t know who I love more; the controlled Neil or easy going Adrian!

I’ll come out and say it; hockey is my favorite sport romance. These two men had so much chemistry I was afraid my Kindle would explode. This story had me laughing and biting my nails with everything going on around them and I’m excited to see what this series will bring to the table.

Once again a new to me author and I’m an instant fan. To say I’m highly recommending this story is an understatement!!! You NEED to read this book!!

***Review copy requested and reviewed on behalf of OMGReads Blog***

View all my reviews

He Shoots, He Scores by Tricia Owens
My rating: 5 of 5 stars

Hockey is a game. Real men play it. They can either win or lose. But when a hockey player loses the Stanley Cup it’s devastating. Specially if he comes out of with with a broken arm and a concussion. Neil is such a man and he’s not handling it very well.

Adrian plays hockey. He didn’t lose the Stanley Cup and he is handling it great. Circumstances have Neil and Adrian at the same place, at the same time and Neil’s concussion leads to both men revealing they are gay and hot for each other. Then suddenly they are on the same team. Let the games begin.

I loved this book. Hot times, hockey, and great characters. It ended way to soon. Liked the instant attraction and the wait to act on it. I read several of the authors books (she has an extensive catalog) and like her writing style. I’m really looking forward to more of this series.

Review Copy requested and reviewed on behalf of OMGReads.
View all my reviews

He Shoots, He Scores by Tricia Owens

Loved the slow burn here! Neil was such a tough nut for Maggy to crack and it was good to see that this was a real journey and there was no insta-love—plenty of instant attraction—and any lustful thoughts and feelings had to be kept on the downlow. This really was a love hard fought, I felt sorry for Maggy at times because he’s like some big bouncy, happy puppy and he’s always looked out for Neil, whether Neil realised it or not, but Neil was so reluctant to let go and was fighting against himself almost for the majority of the story. He’s so complex and it’s this depth of character here that rewards you with such a rich, honest and believable romance. There’s plenty of hockey talk that was interesting and insightful, even if you know very little about the sport and a great selection of supporting characters. How will these two work it out? Looking forward to the next instalment to find out.

Review Copy requested and reviewed on behalf of OMG Reads.

View all my reviews

Tricia Owens has been writing m/m fiction since 2000, after stumbling onto the term ‘slash’ and thinking it referred to horror stories. She is the author of the Sin City, A Pirate’s Life for Me, and Juxtapose City series, among several others. She lives in Las Vegas.